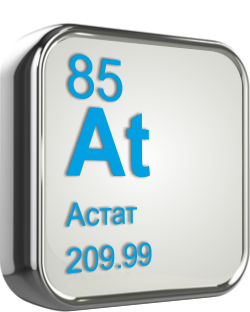 Atomic number     85
Atomic mass     209.99
Density, kg / m?   8750
Temperature
melting, ° С       302
Astatine - dark blue unstable crystals. Astatine has no stable isotopes; at least 20 radioactive isotopes of Astatine are known. Multiple attempts by scientists from different countries to discover element no. 85 by all kinds of chemical and physical methods in natural objects were unsuccessful. In 1940, E. Segre, T. Corson, and W. McKenzie obtained the first Astatine isotope at the cyclotron in Berkeley (USA) by bombarding bismuth with β particles. The name "Astatine" is given from the Greek. astatos- unstable. Only after this artificial production of Astatine was it shown that 4 of its isotopes are formed in very unlikely branches of three natural series of radioactive decay of uranium and thorium. Astatine is well adsorbed on metals (Ag, Au, Pt), easily evaporates under normal conditions and in vacuum. & Nbsp;
Sections