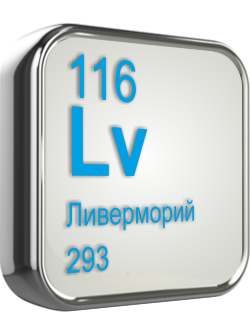 Livermorium is a member of the chalcogen group, where it follows polonium. The announcement of the discovery of element 116 in 1999 in Berkeley (USA) turned out to be erroneous and even falsified. The synthesis according to the announced method was not confirmed in the Russian, German and Japanese nuclear research centers, and then in the United States itself. An article reporting the discovery has been withdrawn. Livermorium was discovered by isotope synthesis in 2000 at the Joint Institute for Nuclear Research (Dubna, Russia) in cooperation with the Livermore National Laboratory (USA), the Research Institute of Atomic Reactors (Dimitrovgrad, Russia) and Electrokhimpribor (Lesnoy, Russia). The results of the experiment were first published on December 6, 2000.

Later, at the same Joint Institute for Nuclear Research, the synthesis of isotopes of the element was confirmed by the chemical identification of the final product of its decay.