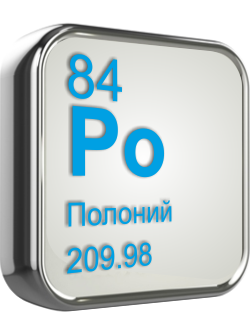 Atomic number       84
Atomic mass       209,98
Density, kg / м?     9300
Temperature
melting, ° С       254
Polonius - soft radioactive metal of silvery-white color. The element was discovered in 1898 by the spouses Pierre Curie and Marie Sklodowska-Curie in uranium resin ore. They first announced the discovery on July 18 at a meeting of the Paris Academy of Sciences in a report entitled "On a new radioactive substance contained in resin blende." The element was named after the birthplace of Maria Sklodowska-Curie - Poland (lat.Polonia).
An important field of application of polonium-210 is its use in the form of alloys with lead, yttrium or independently for the production of powerful and very compact sources heat for autonomous installations, for example, space. For example, the Soviet self-propelled vehicles of the Lunokhod space program used a polonium heater to heat the instrument compartment. Polonium is a strategic metal, must be very strictly accounted for, and its storage must be under state control due to the threat of nuclear terrorism.
Sections