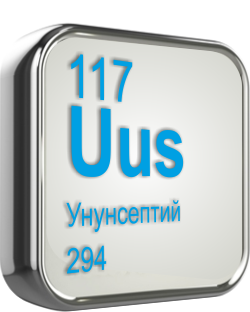 Tennessee was first obtained by JINR in Dubna (Russia) in 2009. For the synthesis of the 117th element, a target from the isotope of berkelium obtained at the Oak Ridge National Laboratory (USA) was fired with calcium ions at the U-400 accelerator of the Laboratory of Nuclear Reactions, JINR. As a result, six cores of the new element were recorded. On April 5, 2010, a scientific article describing the discovery of a new chemical element with atomic number 117 was accepted for publication in Physical Review Letters. In June 2012, the experiment was repeated. Five Tennessee nuclei were recorded. In 2014, the existence of the 117th element was confirmed by an international group of nuclear physicists working at the Center for the Study of Heavy Ions. Helmholtz (Darmstadt, Germany).