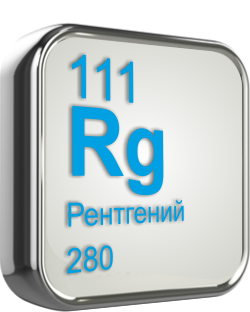 It is assumed that X-ray is a transition metal, analogous to gold. X-ray belongs to the group of noble metals, and it is assumed that it is a chemically inactive metal. Since the activity of noble metals decreases with increasing serial number, it is assumed that X-ray is even less active than gold, and thus is the most chemically inert metal. The color of X-rays is unknown, but calculations show that for X-rays, as well as for silver, the ground state will be stable and no electron hopping will be observed. Therefore, the metal will have the same color as silver if obtained in macroscopic quantities. The X-ray density can be extremely high - it can be significantly heavier than osmium. Element 111 was first synthesized on December 8, 1994 in the German city of Darmstadt. The authors of the first publication, which soon appeared in a German journal, were S. Hofmann, V. Ninov, F.P. Hessberger, P. Armbruster, H. Folger, G. Munzenberg, H. Schött, A. G. Popeko, A. V. Eremin, A. N. Andreev, S. Saro, R. Yanik and M. Leino. In addition to German physicists, the international group included three scientists from the Russian Joint Institute for Nuclear Research, a Bulgarian, two Slovaks and one representative from Finland.