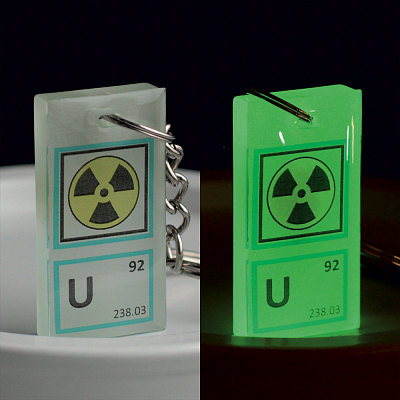 Atomic number       92
Atomic mass         238.03
Density, kg / m?       19050
Temperature
melting, ° С           1132
Uranus is a heavy silvery-white shiny metal. & Nbsp;
Uranus was discovered in 1789 by the German chemist M. G. Klaproth and named after the planet Uranus, discovered by W. Herschel in 1781. Uranus is in a metallic state received in 1841 by the French chemist E. Peligot. Initially, Uranium was attributed to an atomic mass of 120, and only in 1871 D.I.Mendeleev came to the conclusion that this value should be doubled. & Nbsp;
For a long time, uranium was of interest only to a narrow circle of chemists and found limited application for the production of paints and glass. With the discovery of the phenomenon of radioactivity of uranium in 1896 and radium in 1898, industrial processing of uranium ores began with the aim of extracting and using radium in scientific research and medicine. Since 1942, after the discovery of fission in 1939, uranium has become the main nuclear fuel.
Sections