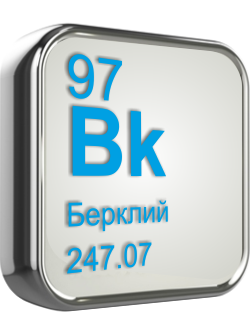 Berkelium is a silver-white radioactive metal. Received in 1949 by scientists of the National Laboratory. Lawrence in Berkeley (California, USA; formerly the Radiation Laboratory) by S. Thompson, G. Seaborg, A. Gyorso while bombarding an americium target with? -Particles accelerated at a 60-inch cyclotron. Berkelium is a chemical analogue of terbium, named after the small village of Ytterby in Sweden, near which a mineral was discovered containing, among other rare earth metals, terbium. Therefore, it was decided to name the 97th element after the name of the city of Berkeley, in which it was first obtained.