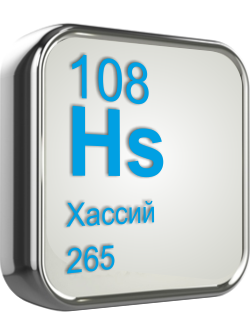 Atomic number       108
Atomic mass       265
Density, kg / m? < span class = "Apple-tab-span" style = "white-space: pre;">           -
Temperature
Melting, ° С             -
The first reports of the discovery of element 108 appeared in early 1970 and were completely unexpected for extremely short-lived and elusive superheavy chemical elements. Based on the results of an expedition in a desert area near the Cheleken Peninsula near the Caspian Sea, a group of Soviet scientists led by V.V. Cherdyntsev, based on recording tracks (traces of nuclei) on samples of the mineral molybdenite, made a bold conclusion about the discovery of element 108 with an atomic mass of 267 in nature. Subsequently, the scientific credibility of the conclusion was challenged as insufficiently proven. Element 108 was reliably discovered in 1984 at the Heavy Ion Research Center, Darmstadt, Germany, by bombarding a lead target with an iron ion beam from the UNILAC accelerator.
Sections