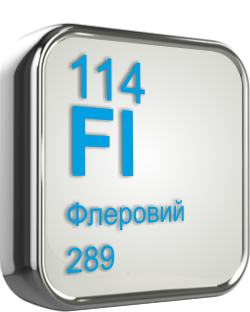 The official name of flerovium is given in honor of the Laboratory of Nuclear Reactions. G.N. Flerov of the Joint Institute for Nuclear Research, where the element was synthesized. The laboratory bears the name of its founder, Soviet physicist G.N. Flerov, head of the group that synthesized elements numbered from 102 to 110. For the first time, the element was obtained by a group of physicists led by Yu.Ts. Oganesyan at the Joint Institute for Nuclear Research (Dubna, Russia) with the participation of scientists from the Livermore National Laboratory (Livermore, USA; Dubna-Livermore collaboration) in December 1998 by the synthesis of isotopes through the fusion of calcium nuclei with plutonium nuclei. The receipt of the element was confirmed in 2004 and 2006 by the Dubna-Livermore collaboration in Dubna, as well as in 2009 at the Lawrence National Laboratory in Berkeley (USA). Later, at the same Joint Institute for Nuclear Research, the synthesis of isotopes of the element was confirmed by its chemical identification by the final decay product.