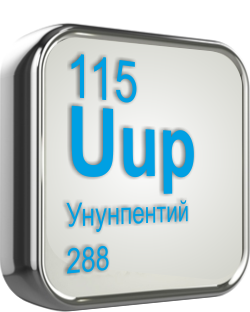 In February 2004, the results of experiments conducted from July 14 to August 10, 2003 were published, as a result of which 115th element. The studies were carried out at the Joint Institute for Nuclear Research (Dubna, Russia) on the U-400 cyclotron with the use of the Dubna gas-filled recoil nuclear separator (DGRNO) together with the Livermore National Laboratory (USA). In these experiments, as a result of the bombardment of a target from americium with calcium ions, isotopes of element 115 were synthesized. In 2013, an international group of scientists led by physicists from Lund University (Sweden) confirmed the existence of isotope 288. An experiment on bombarding a thin film of americium with calcium ions was carried out at the Institute heavy ions named after Helmholtz, GSI (Darmstadt, Germany). As a result, 30 atoms were produced. On December 30, 2015, IUPAC officially recognized the discovery of element 115 and the priority in this by scientists from JINR and Livermore National Laboratory.