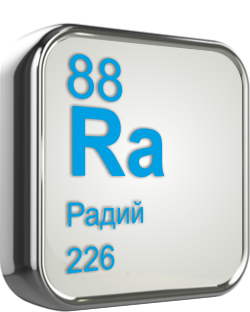 Atomic number     88
Atomic mass       226
Density, kg / m?     5500
Temperature
melting temperature, ° С         700
Radium is a shiny radioactive alkaline earth metal of a silvery-white color that quickly tarnishes in air.
French scientists Pierre and Marie Curie discovered that the waste left after the separation of uranium from uranium ore (uranium tar mined in the city of Joachimstal, Czech Republic ) are more radioactive than pure uranium. From this waste, the Curies, after several years of intensive work, isolated two highly radioactive elements: polonium and radium. The first report on the discovery of radium (in the form of a mixture with barium) was made by Curie on December 26, 1898 at the French Academy of Sciences. In 1910, Curie and André Debierne isolated pure radium by electrolysis of radium chloride on a mercury cathode and subsequent distillation in hydrogen. & Nbsp;
In Russia, radium was first obtained in the experiments of the famous Soviet radiochemist V.G. Khlopin. < / div>
Radium is the very first radioactive element that has found practical application in medicine and technology. Today radium is used in medicine for the preparation of radon baths and short-term irradiation for malignant diseases of the genitourinary tract, skin and nasal mucosa.
Sections