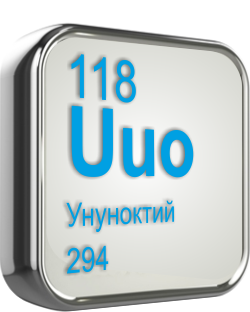 The first statement about the discovery of element 118 in 1999 in Berkeley (USA) turned out to be erroneous and even falsified. Used the reaction of cold fusion of lead and krypton nuclei. The synthesis according to the announced method was not confirmed in the Russian, German and Japanese nuclear research centers, and then in the United States. The first decay event of element 118 was observed in an experiment carried out at JINR in February - June 2002. On October 17, 2006, Russian and American nuclear physicists officially announced the receipt of the 118th element. Repeated synthesis experiments were carried out at the Dubninsk accelerator in February - June 2007. As a result of the bombardment of the californium target with calcium isotope ions, two more nuclei of the 118th element were formed. On December 30, 2015, IUPAC officially recognized the discovery of element 118 and the priority in this for scientists from JINR and Livermore National Laboratory.