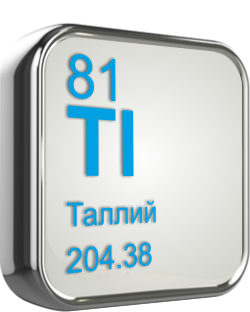 Thallium is a soft, silvery-white metal with a bluish tint. Thallium was discovered by the spectral method in 1861 by the English scientist William Crookes in the sludge of the lead chambers of the Harz sulfuric acid plant. Pure thallium metal was independently obtained by Crookes and the French chemist Claude-Auguste Lamy in 1862. Thallium remained “unemployed” for 60 years after Crookes was discovered. But by the beginning of the 1920s, the specific properties of thallium preparations were discovered, and immediately there was a demand for them.

In 1920, a patented poison against rodents was obtained in Germany, which included thallium sulfate ... This tasteless and odorless substance is sometimes included in the composition of insecticides and zoocides today.