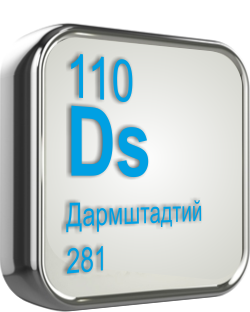 Darmstadtium is an artificially synthesized chemical element. The element was named after the place of discovery. First synthesized on November 9, 1994 at the Center for Heavy Ion Research, Darmstadt, S. Hofmann, V. Ninov, F.P. Hessberger, P. Armbruster, H. Folger, G. Munzenberg, H. Schott and others. The discovered isotope had an atomic mass of 269.

The new element was obtained in the fusion of nickel and lead atoms as a result of the bombardment of a lead target with nickel ions accelerated in the UNILAC ion accelerator at GSI.
Sections