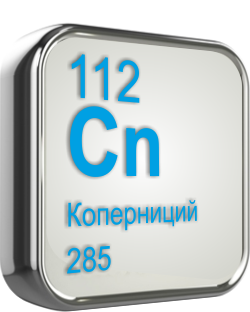 Copernicium is probably a liquid metal. For the first time, A. Marinov announced the possible synthesis of the 112th element in 1971. The group led by Marinov irradiated tungsten with protons with an energy of 24 GeV. It was assumed that tungsten atoms, colliding with a high-energy proton, acquire sufficient energy to merge with another tungsten atom. As a result, they discovered β-decay chains, presumably emanating from the 112th element. However, subsequent research showed that this interpretation of the results was erroneous. Copernicium was first synthesized on February 9, 1996 at the Heavy Ion Institute in Darmstadt, Germany. Two copernicium nuclei were obtained by reactions of accelerated atomic zinc nuclei on a lead target in a heavy ion accelerator.