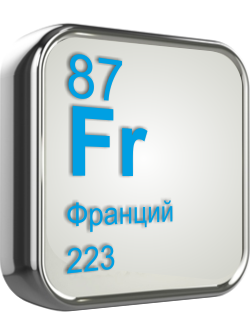 Atomic number     87
Atomic mass     223
Density, kg / m?   2500
Temperature
melting, ° С       27
France - a radioactive alkali metal with extremely high chemical activity. The existence and main properties of the heaviest analogue of alkali metals were predicted by D.I.Mendeleev in 1870, but for a long time attempts to discover this element in nature ended in failure. Only in 1939, the French researcher M. Perey was able to prove that the Astatine nuclei in 12 cases out of 1000 emit? -Particles and at the same time pass into the nuclei of element 87 with a mass number of 223, which Perey singled out. The researcher named the new element after her homeland. As a member of the radioactive series, it is present in nature in trace amounts. According to calculations, the surface layer of the Earth 1.6 km thick contains about 24.5 g of Fr.
Due to the high rate of radioactive decay, the properties of France have been studied only on samples containing negligible amounts of this element. div>
Sections