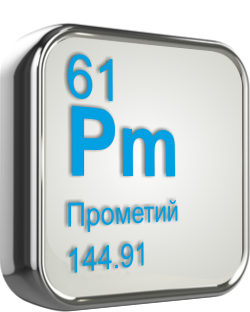 Atomic number         61
Atomic mass           144,91
Density, kg / m?         7220
Temperature
melting, ° С           1080
Promethium is a light gray radioactive metal. In 1945, American chemists D. Marinsky, L. Glendenin and C. Coryell isolated promethium from the fission products of uranium using ion-exchange resins.
In 1947, thanks to studies of the chemical properties of promethium, the existence of a new element.
Promethium-147 (half-life 2.64 years) is used for the production of radioisotope current sources. Due to the fact that there are no gamma rays in its radiation during decay, it is relatively safe. & Nbsp;
Promethium, as a short-lived radioactive element, is found in nature in vanishingly small quantities (according to estimates, its content in the earth's crust is several hundreds of grams) and could not be opened analytically, despite the efforts of many researchers.
Sections