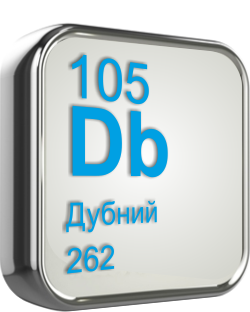 Dubnium is supposedly a silvery white metal. Element 105 was first obtained at the Dubna accelerator in 1970 by the group of G.N. Flerov by bombarding americium nuclei with neon ions and independently at Berkeley. An IUPAC working group concluded in 1993 that the honor of discovering element 105 should be divided between groups from Dubna and Berkeley.