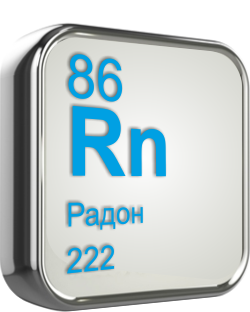 Atomic number         86
Atomic mass           222
Density, kg / m? & nbsp ;       9.91
Temperature
melting, ° С           -71
Radon is a colorless radioactive inert gas. The English scientist E. Rutherford noted in 1899 that thorium preparations emit, in addition to? -Particles, some previously unknown substance, so that the air around thorium preparations gradually becomes radioactive. He proposed to call this substance emanation (from the Latin emanatio - outflow) thorium and give it the symbol Em. Subsequent observations showed that radium preparations also emit a certain emanation, which has radioactive properties and behaves like an inert gas. Initially, thorium emanation was called toron, and radium emanation was called radium. It has been proven that all emanations are in fact radionuclides of the same new element.
Radon is one of the rarest elements. Its content in the earth's crust up to 1.6 km deep is about 115 tons. Radon formed in radioactive ores and minerals gradually enters the earth's surface, into the hydrosphere and into the atmosphere. & Nbsp;
Radon is used in medicine for the preparation of radon baths. Radon is used in agriculture to activate feed for domestic animals, in metallurgy as an indicator in determining the speed of gas flows in blast furnaces, gas pipelines.
Sections