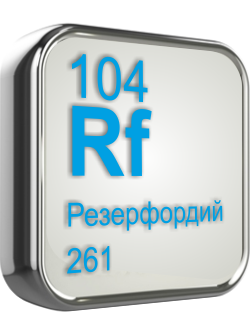 Rutherfordium is a highly radioactive artificially synthesized element, the half-life of the two most stable known isotopes is about 10 and 13 hours. This element cannot be used anywhere and little is known about it, since it has never been obtained in macroscopic quantities. Rutherfordium is the first transactinoid element, its predicted chemical properties are close to that of hafnium. For the first time one hundred and fourth element of the periodic table with a mass number of 261 was synthesized in 1964 by scientists of the Joint Institute for Nuclear Research in Dubna under the leadership of G.N. Flerov. They fired neon nuclei at a plutonium target.