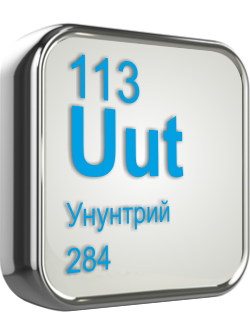 In February 2004, the results of experiments conducted from July 14 to August 10, 2003 were published , as a result of which the 113th element was obtained. The studies were carried out at the Joint Institute for Nuclear Research (Dubna, Russia) together with the Livermore National Laboratory (USA). In these experiments, isotopes of element 115 were synthesized as a result of bombardment of an americium target with calcium ions. In September 2004, a group from the RIKEN Institute, Japan, announced the synthesis of an isotope of the 113th element in the amount of one atom. They used the fusion reaction of zinc and bismuth nuclei. As a result, over 8 years, Japanese scientists managed to register 3 events of the birth of nichonium atoms. The hot fusion method used by scientists from JINR turned out to be much more effective than the cold fusion method used by scientists from RIKEN, making it possible to obtain several tens of nichonium atoms versus three from the Japanese. In addition, Russian-American experiments have been successfully replicated in Darmstadt and Berkeley. Nevertheless, the IUPAC / IUPAP working group recognized the priority of the Japanese scientists in the discovery, since the light isotopes of nichonium they obtained were converted into well-studied isotopes during their decay.